This is our understanding of this year's paper and how the book responds to it. We are commenting  on only first few questions, but the readers will get an idea about how to approach Mains questions, especially with the help of the book Essential Sociology. (Just in case some other question piques you, please drop a comment below the post, I shall get back).

Q1. (a) Focal point of Sociology rests on interaction. How do you distinguish it from common sense.
The question was not a very direct one, but if your concepts are clear, then you can easily answer this. Interaction is an important dimension of sociological analysis as various social thinkers have highlighted. So, as per many thinkers, it is a focal point and their arguments need to be made part of your answer. It is different from common sense because - common sense is a often person or context specific, but interaction is a group phenomenon. Common sense is intuitive, interactions are often calculative and in interactions responses are fabricated instantaneously as per the demand of the situation. Common sense on the other hand provides stereotypical prefabricated answers to situations - in one size fits all manner - without much application of mind. The book covers the topics very well and one can easily come up with a good answer if one is well versed with concepts given in book.

Q1. (b) Distinguish between Fact and Values in Weber's Protestant Ethics and Spirit of Capitalism.
The question is a very straight forward. The book has clearly explained what a fact is and what is a value. Weber's idea of Protestant Ethics embodies values (in terms of the subjective beliefs of Protestants as well as Weber's own understanding of those values - thus a dual application of concept of 'values' in Sociology). Fact includes - historical conditions, material factors, Capital and other such dimensions which are accepted by all indisputably. The book dwells almost completely on all these aspects which explaining Weber's idea of Protestant Ethics and Spirit of Capitalism. 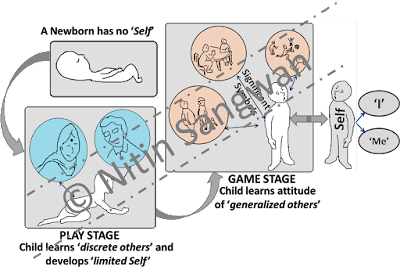 Q1. (c) Do you think 'I' and 'Me' are central terms in Mead's work?
The question appears as if it is straightaway taken from book. The diagram that we have drawn for Mead's idea of self must have proved particularly helpful. I am reproducing the diagram here for convenience of readers of this post.

2 (a) Is non-positive methodology scientific? Illustrate.
The answer in one single word is  - yes it is scientific. The book clearly mentions the arguments that Sociology as a subject is scientific and as a corollary - all the approaches (including non-positive methodology) which are used to study Sociology are also scientific. This is because, non-positivists also use certain methods and approaches which confirm to scientific study. One may conclude that - it may not be as scientific as natural sciences which are considered pure sciences. (Arguments to this effect are given in detail in the book).

Q2. (b) Explain Durkheim's basic arguments on suicide. Can you analyse high suicide rates of contemporary Indian society with Durkheim's theory.
First part of this question can be directly answered using the contents of this book or in fact any other standard book. Second part needs to be given some thoughts. Durkheim's theory fits only to the extent that it explains certain social currents which cause suicide. Modern socio-psyschology has established that there are way more number of factors (as compared to the model that Durkheim has taken into account) and suicide is much more complex phenomenon to explain using a single model. Hence, in conclusion, applicability of Durkheim's model is only limited in contemporary Indian society.

Q3. (a) Does collapse of functionalism and bankruptcy of Marxism coincide with the rupture of modernity? Discuss
This is one of the questions in this paper which tests the real understanding of the subject as a whole because the question itself is very value loaded. First of all, one may not agree that functionalism has collapsed completely and Marxism has bankrupted. After the financial crisis of 2008-10, Das Capital of Marx was one of the highest selling books worldwide as people suddenly lost faith in working of capitalism. Rupturing of modernity is also not a very well accepted idea. Even if rupturing of modernity is accepted, post-modern thoughts are wide enough to accommodate both functionalism and Marxism in their modified forms. Finally, traditional timelines of flourishing of Marxism, functionalism and modernity are not coterminous. So, the statement in the question is perhaps not true. (However, this is one question which can be answered in so many different ways - and many of them being equally good ways of answering this question).

Q3. (c) What is the difference between Anomie in case of Merton and Durkheim. Explain.
The question is again straightforward. The book also uses a beautiful table to illustrate it. I am reproducing that table here again for the convenience of all the readers of this post.

Q4 (a) According to Marx, how are human beings alienated from their human potential and what does he suggest to change this?
We have explained in the book that human is basically a creative being and capitalism kills creativity of humans leading to alienation. This creative aspect or potential of human personality is subdued to a great extent in Capitalism and Marx also uses a concept of Commodity Fetishism to explain a situation where commodities of consumption assume more importance than humans and man feels alienated to the highest degree. Marx' idea of alienation of humans from their potential is explained in the book by using a model which shows two ways in which it happen in a given mode of production and over the period of time. The book also clearly explains various dimensions (four to be precise) by which Marx thinks that alienation of humans and their potential occurs. The book also mentions the solution which I am quoting here verbatim -
"Solution to alienation was visualized in a state when production process was overhauled and relations of production modified. It happens in communism where forces of production will be collectively owned. In communism only, being of man is truly realized and he goes for all the creative pursuits that were inhibited in earlier modes of production." (taken directly from the book Essential Sociology)

Q4 (c) Discuss the challenges thrown by religious revivalism to a secular nation-state.
The question is simple and the book covers it directly in two senses - one revivalism in form of growth of fundamentalism and regeneration of orthodox religious beliefs. Secondly, growth of dubious sects and cults (like Dera Schha Sauda) also reflect another form of revivalism and the book covers both these aspects and how they affect secular fabric of a nation-state (or simply saying, of society). Apparently, communalism, fundamentalism and cultic sects have thrown enormous challenges to secular fabric by challenging modern ideals. But there is a flip-side of religious revivalism also and it has also given birth to some sort of personal faith and spiritualism which has also taught the people to accommodate modern idea of secularism in a nation state.

Q5(a) Is the theory of cultural lag valid in present times? Discuss.
If you are well versed with the concept of cultural lag, which has been covered clearly in the book, then you should have no difficulty in appreciating the fact that cultural lad is ever present phenomenon despite its criticism. Though degree of its occurrences may vary from society to society and from time to time.

Q5(b) Are social movements primordial in means and progressive in agenda? Explain.
The statement is not true and this can be explained with the help of various models and various types of social movements that the book deals with in detail. For example, Aberle's classification is sufficient to illustrate that all social movements may not be equally progressive. It is also not true that social movements always use primordial means. In fact a category of social movements - New Social Movements (which is covered in the book to a great length) - also amply illustrate this point. Just to substantiate the above points further, the book also uses a small box which we are reproducing it here and it will illustrate that contemporary social movements are not constrained by nature of their means.
"Globalization and Social Movements – Globalization has made genuine global social movements possible. People are able to join together through networks of human rights organizations, internet, humanitarian group, NGOs, environmental groups and so on. Organization of global level protests against Iraq War in 2003, protests against WTO, organization of ‘World Social Forum’ parallel to World Economic Forum etc are some examples."
.
.
.
Similarly, most of the questions in the 2018 Sociology Mains paper are easily doable with a fair understanding of the basic concepts. Barring one or two questions, all are covered in the book almost directly with ample material for answers. Q7b and Q8a are two such questions in paper-1, while Paper 2 has no such question which is difficult to attempt. Q7b is perhaps about Hawthrone Studies of Elton Mayo (a passing reference to them is in the book also, but since they are not part of the syllabus explicitly, they are not covered in detail, but I am sure a curious reader must have googled them while reading the book). Paper 2 was relatively interesting with a lot of contemporary stuff, but must have been very doable for a well read aspirant.

We are extremely happy that the book must have helped everyone immensely in tackling 2018 Sociology Mains Exam and we received many positive feedback about the utility of the book in your preparations. If it did so, purpose of writing a single source book for Sociology was definitely fulfilled.

Thanks and best of luck!!
Nitin and Seema